Being deeply loved by someone gives you strength, while loving someone deeply gives you courage. – Lao Tzu

Woke up this morning to squeals from the kids……the younger ones that is. It was great to wake up in my own bed. Was pukey first thing and I guess this is what it is going to be like for a while. I am very shaky. My voice is trembling when I speak too.

I still can’t eat. Today’s breakfast was a tea spoonful of apple yoghurt, the same for lunch and the same for dinner. It is really horrible not to be able to eat and the longer I leave it, the harder it is. I have not had a proper solid meal now since 3 July – a whole month!

I promised Emma we would try and get her the Pokemon game. Got Dots to take us over as I am very shaky and not able to drive just yet.

Cathal went to his minder for a few hours – that is his routine and I am not able to mind him for a full day just yet. I can’t lift him yet as my arms are not strong enough.

I can’t even walk up the stairs without help.

I am so full of ideas and things I want to do that I have not been able to do for the past month, but I am not up to it. It’s terrible to want to do so much but to be so weak…..

In the middle of the day I was standing at the back door and a wave of nausea hit me and I was violently sick outside on the grass. When I turned around everyone was looking at me. I am so used to vomiting now that I don’t even think about it. It’s still not pleasant to have to vomit but it’s just happening so much, I just go with the flow.

Cathal came home in the afternoon and I put my feet up on the couch and played with him and chatted to the family.

It was a quiet day and evening but that is just what the doctor ordered – literally!!!!

Everyone left me today. My sis went to Belturbet for holidays and Mam went home with her. I guess it has been hard for people who have been helping out to be away from their own places and comforts.

I was tempted outside by the mild weather but I got tired standing, watching the kids.
Bryan went off and bought a wooden bench for under the porch so as I had somewhere to sit.

I sat out on it for a while today watching Emma and Cathal. I can’t join in like I used to be able to – no going on the pogo stick for me for a while!

I was wrapped up in a big blanket with my bandana on my head as I am still very bald. My eyes are very sensitive to the light as they are still very red and sore. I must look strange to passers by, but I am alive and home, and that is all that matters.

We had a quiet day. I am not up for much. They don’t mind though as it is just nice for the four of us to be back together.

We watched Jaws 2 and in the middle of it I got a terrible cramp in my stomach and I went outside for some fresh air. Of course I ended up throwing up and had no time to run to the bathroom.

I am not sure how I am going to cope with the kids once Monday comes. I still can’t look at food or prepare it. The idea of handling raw meat or boiling vegetables turns my stomach.

I am surviving on three teaspoons of apple flavoured yoghurt a day. I just can’t eat anything else. There is a psychological battle now to will myself to eat. It is very hard.

Fell asleep before the end of Jaws 2. I guess they get the shark.

I woke just before 9am. Cathal came in and was snuggling. We had planned an outing but the weather was too bad. Emma was in and out all day in the rain and of course Cathal wanted to do the same. He is very clingy at the moment, which is to be expected and sure all I can do is sit around anyway so that suits him. My legs feel like two lumps of lead. I have no energy. Cathal wants to be lifted but I can’t. I know I will get stronger with time but it is so slow.

I had to wake Cathal at 9am. Emma was away on a sleepover so it was just the three of us so Bryan suggested a trip to our local shopping centre. I was delighted to be doing something so normal and boring.

I felt very sick all of a sudden in the centre and I had to make a dash to the toilet. It was not good.

I am still not eating but I tried a drink of smoothie which was okay for about three sips and then I felt sick again!

It is very hard to keep on top of things in the house. I was talking to my mum in law and she was horrified that I am on my own and intends to come up. I was so relieved.

I dozed on the couch while Cathal was having his nap this afternoon. I feel so tired, weak and useless!

The cat is pregnant again and about to drop any day. Another thing I failed to attend to due to my sickness. This could be a whole litter of kittens this time instead of the one she had in May. Oh dear.

Eating is still not great and I just need courage to try. I am so scared of being as sick as I was in hospital that I am afraid to try. I am getting weaker I think and afraid they will keep me in Tallaght hospital when they see me this week.

I am amazed that I am not teary and weepy. Maybe I have no spare fluids?

Despite everything that is going on with me – it is so great to be home.

A normal work day for people but not for me. Cathal went off to his minder and Emma did not stir until nearly 11am. She came into me in the bed and we watched MTV Cribs.

More post arrived and there was a very funny photo collage from work which really lifted my spirits. People have been amazing with cards, calls, texts, flowers and all sorts of relics and prayers.

I have had Mass said for me in Lourdes, Scotland, England, America, Fatima, the Holy Land, Rome and all over the country. I have two drawers now full of cards and letters. The support is incredible from work colleagues and my bosses. Amazing. I could not get through this without the support.

I am still home alone during the day and I am struggling but my wonderful Mum in law is coming up to save the day. She was not happy about me being on my own. She will stay for a week or so and that should help me to get stronger and maybe I will be able to try eating again.

Neighbours and Emma’s friends are being fantastic. Offers of shopping and taking the kids are there all the time. Emma has been taken off for a picnic in the Japanese Gardens in Kildare so I will be able to rest for the early part of the afternoon.

My mum in law came up today and she thought I looked a hell of a lot different to when she last saw me. Better, she thought, definitely better.

She cooked a lovely dinner but I couldn’t eat. I am still only managing one yoghurt a day. I know it’s not good but I just can’t eat.

I threw up again today a couple of times.

Today was my first visit to the haematology day ward since being discharged from hospital. I couldn’t drive so Bryan had to take me to Dublin.

I was nervous going in. Bryan had to drop me at the door as I could not manage a walk from the car park. I’m moving very gingerly as I feel so sick.

I threw up a few times.

The nurses checked me over. I had bloods taken. The looked at my central line wound and are happy with how it’s healing.

I told them about the food and eating issue and they told me not to be stressing. They will arrange a visit to a dietician.

All was good and I was let home again which was such a relief. They want to see me weekly for the foreseeable future.

I was really tired after the trip and spent the evening resting on the couch.

I threw up again first thing this morning. It’s a crap way to start the day. Cathal stayed home with us today. I can’t manage him on my own but with help here it’s great. He’s very clingy to me and he keeps saying “You came home to me Mammy”. His little face looking at me as he says it is just adorable.

What must he have thought of me being gone as long as I was? 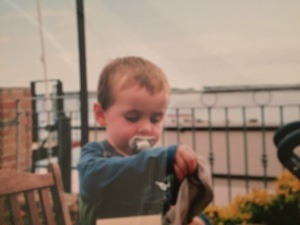 Had a good day and managed to have a few sips of tomato soup. My stomach felt very heart-burned afterwards ….

Had teaspoons of yoghurt for rest of the day.

There was Pandemonium with a capital P in the house this morning. Mom cat whose pregnant came in this morning looking very skinny. I knew that she’d had the kittens outside so we had to go hunting for them. We found them in the wooden house and brought the three of them inside – two are plain black and the other is like Rocky, the kitten she had in May. We settled them inside with her. They are adorable and Cathal and Emma are so happy.

I drove today for the first time since 3 July. We went to Mass – my first Mass in weeks as I haven’t been able to go. I sat near the door at the front and felt every inch of the wooden seat. I couldn’t kneel as my leg muscles can’t get me up and down. It was lovely to be back and I said a prayer of thanks … and lit a candle ….. It was all a bit overwhelming….I didn’t stay around afterwards to chat. I’m not up to it.

I stayed in for the rest of the day. It was raining again.

I am starting to feel a bit better but I am worried about my diet and whether I will be able to eat properly again. I have no taste and my saliva has disappeared.

It’s going to be a slow process.

Also I have no clothes to fit me. It’s like I swallowed an Alice in Wonderland pill and shrunk.