I can never read all the books I want; I can never be all the people I want and live all the lives I want. I can never train myself in all the skills I want. And why do I want? I want to live and feel all the shades, tones and variations of mental and physical experience possible in my life. And I am horribly limited.

In the middle of September 2007 I attended the haematology day ward in Tallaght hospital for bloods, review and to have a bone marrow biopsy. The biopsy would tell us whether the transplant had worked and we would also find out if the myeloma was gone.

I was calm and relaxed as I waited as I had been through the process many times.

I met Dr Sean and Dr Larry – the two doctors who had looked after me most often during my transplant. Dr Sean almost passed me by in the hallway without saying hello because he didn’t recognise me.

Dr Larry was the one doing my bone marrow biopsy and he too was shocked to see me. He remarked on the extreme weight loss while I coaxed him to give me plenty of local anaesthetic. A bone marrow biopsy is painful, especially once the anaesthetic wears off.
We got it all done and I was told to come in for the results two weeks later as part of my scheduled haematology appointment.

This diary entry was written at the end of that day eight years ago when I went in to hospital to hear the results.

I can’t describe how in bits I was this morning. I was wide awake at 5.30am walking around the house, pacing up and down. Sleep didn’t come too easily last night either. I got very emotional with the kids this morning – I know they didn’t really understand why. I was uptight, nervous and it was very difficult to utter any words that made sense.

I had decided to go to the hospital by myself (again). I had all sorts of offers from people who were happy to come with me but I needed to do it on my own. If it was bad news I would have time to absorb it myself before I had to break the news to anyone else.

People knew I was getting my results today so my phone was hopping with texts all morning with good wishes and offers of prayers.

I dropped the kids to school and delayed a bit chatting to people – all the time prolonging the journey to Tallaght Hospital.

When I got to the hospital I had to have my regular bloods done so I headed straight to phlebotomy. Then it was up to haematology. I had a fair idea that some of the nurses knew my results but they couldn’t say anything. I had to hear whatever the news was from my consultant Dr Slaby.

In fairness they all knew how nervous I was and they got me into a side room to wait for Dr Slaby almost as soon as they saw me. He arrived and was a bit concerned about the cough I have. I was sitting beside him and I could see the computer screen. I was afraid to look at it as he pulled up my results. My left hand was shaking so much that I had to sit on it to stop it. I glanced at him and then glanced at the screen and lots of numbers and words blurred in front of me but then I thought I saw the words ‘no myeloma present in the bone marrow sample’. I thought I was seeing things so I closed my eyes because I was too afraid to hear bad news after everything I had been through.

Then Dr Slaby said the words: “We’ve done it. The Myeloma is gone.”

I punched the air with both fists saying YES！I wanted to scream the place down but I somehow composed myself. I don’t know how or why.

I honestly didn’t hear a word he said to me after that – something about maintenance treatment. Then he realised I wasn’t hearing him and he said “that’s for another day”.

He said he was concerned about my cough so he insisted I hang around for an Xray. I was bursting to get out of the office and he eventually said that’s it and we shook hands.

I ran out into the day ward and ran straight into one of the nurses who had taken care of me and I said ‘I’m in remission’ and she said ‘I know’ with a huge smile on her face. She hugged me and realised how badly I was shaking from shock so she put me into a side office and told me to dial 9 for a line out and not to come out or attempt to leave the hospital until I was a bit more settled. She said well done and left with a huge smile on her face.

I dialled 9 and called my hubby Bryan but there was no answer. Then I dialled my mother and just as she was about to talk to me I cut her off by mistake. I was all fingers and thumbs and couldn’t work my mobile. Bryan rang me back and it was one of the most emotional moments of my life. I could hardly get the words out. “I’m in remission”, I said and started to cry – tears of joy, of relief, of sheer unadulterated happiness. He said ‘you deserve champagne tonight so that’s what we will do’. It was just a moment I will never forget.

I called other friends and then my work colleagues as I knew people were waiting. There was such joy and love coming at me down the phone lines from family, friends, colleagues. My phone went into overdrive.

I remember leaving the room and meeting the other nurses – they were all thrilled as they had all been willing me to be well. I owe my life to this team of amazing men and women in Tallaght hospital. There is no way to ever repay them for giving me my life back but I am determined to try by staying well for as long as I possibly can.

There was such joy in the dayward but we all had to be mindful of people around me who were not receiving good news on the day I got my life back.

I went off for my Xray and skipped out the door of the hospital. I wanted to stop everyone I met on the way to tell them that I had done it! That I was in remission and that the myeloma was gone.

I remember heading home down the N7 singing along to the radio. A song by the Hot House Flowers came on called “I can see clearly now the rain has gone” I sang along to it at the top of my voice thinking how apt the lyrics were.

I can see clearly now, the rain is gone, I can see all obstacles in my way
Gone are the dark clouds that had me blind
It’s gonna be a bright (bright), bright (bright)
Sun-Shiny day.

I think I can make it now, the pain is gone
All of the bad feelings have disappeared
Here is the rainbow I’ve been prayin?for
It’s gonna be a bright (bright), bright (bright)
Sun-Shiny day.

I can see clearly now, the rain is gone,
I can see all obstacles in my way
Gone are the dark clouds that had me blind
It’s gonna be a bright (bright), bright (bright)
Sun-Shiny day. 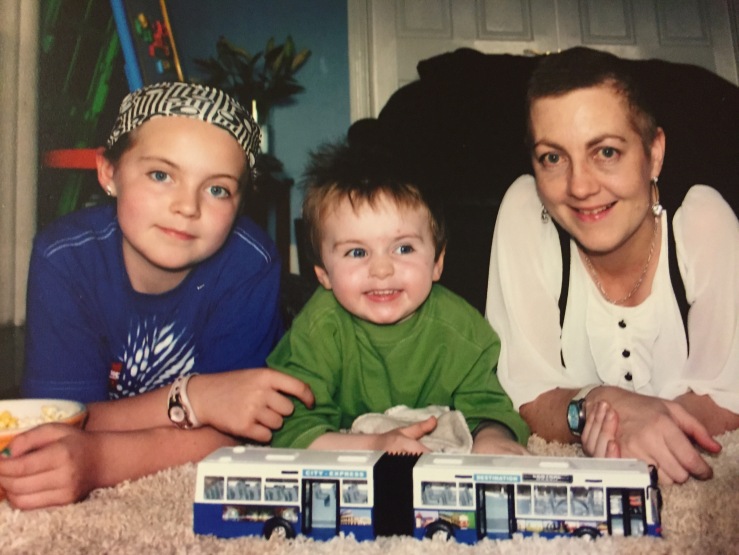 My daughter Emma who was 9 at the time knew that I was getting results on that day. I remember her school bus pulling up and seeing her walking across the green outside our house so I ran over to her and we just stood in the middle of the green hugging after I had told her the news. She was so happy for me.

It was such an incredible moment. At the time I had no idea that my neighbour was watching us from her bedroom window – she knew I was getting results that day and she dropped in a card later that day telling me that she had stood at her window watching this beautiful moment between mother and daughter unfold before her eyes. She said it was impossible not to cry!

There were a lot more tears before the day was over but they were all tears of joy. There was a glass or two of champagne when Bryan got home as it dawned on all of us that I had beaten cancer.

We all take things in our lives for granted – time being one of them. We assume a path in life that includes growing old with the ones we love. At the end of that day eight years ago I knew I would never take time for granted again. Thanks to my diagnosis of cancer time is the thing I find myself most grateful for.